Taking a post workout shake can kickstart the recovery process providing your body a steady stream of amino acids. You also have the choice between a wide variety of protein powder both fast and slow absorbing such as whey and casein depending on what you are trying to achieve.

There are many brands of protein powder out there, both good and bad, so take the time to choose a good one. You should also shop around and take advantage of discount codes to save money on your supplement purchases.

Creatine is one of the most studied supplements and has been proven to work (although there are a small minority of people who are non responders). Whilst the typical “loading phase” advised by manufacturers is not actually necessary you should be taking 3 to 5g per day as the effective dose. Creatine is now present in a lot of other supplements such as protein powder and pre workout drinks so in some cases you might not even have to buy it separately. Since creatine is so cheap, it should be a part of almost everyone’s supplement stack.

Green tea is often used as a fat burner. In studies with animals, green tea extract was shown to burn more fat and lead to less weight gain than in animals that only took a placebo. You should take about 90 milligrams three times per day for best results.

Most people are not eating nearly enough fish, particularly oily fish such as salmon. For this reason many people would benefit from supplementing with fish oil tablets. Fish oil reduces the risk of heart disease as well as has the ability to reduce inflammation. Thus they are perfect for the post workout recovery process.

Pre-workout supplements are extremely popular right now, with a lot of people recommending using them. This is perhaps due to the fact that you can feel its effects almost instantly and so you are more likely to spend money on it.

Their effects are largely overstated, there are some ingredients in them that may give you a small increase in performance in that training session however they won’t be anything liked the claims made by supplement companies. You also don’t need to pay as much as you do for these pre-workout supplements if you just make one yourself and you will still see the same effects. 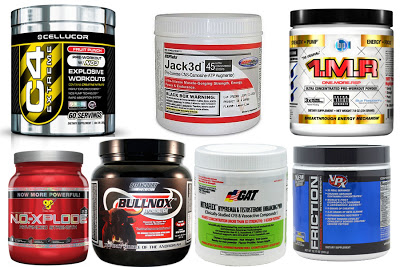 Most of the pre-workout supplements you see on the market today are overpriced and a waste of money. Pre-workout supplements often hide behind proprietary blends that effectively hide the dosages of the ingredients. They are often packed with ingredients that have no scientific backing and in dosages that are either too little to have an effect or too much that it could be dangerous.

For most fitness enthusiasts, the use of pre-workout supplements isn’t necessary and if you do use them shouldn’t be a complicated process. Too many people have been manipulated by the supplement industry’s marketing and think that without taking one they will be unable to give 100% in their training session.

If you truly believe that the quality of your workout depends on a supplement then you probably need to get a new hobby or take some time off for the gym. Of course, you won’t be at 100% every session but you shouldn’t be using a pre-workout as a crutch.

I will outline a stack of ingredients that you could use in a homemade pre-workout which will be just as effective at a fraction of the cost without all of the unnecessary ingredients. These are not the only ingredients you can use but are certainly the ones that are going to give you the best value for money whilst being backed up with scientific evidence.

It includes just 2 ingredients and should be taken 30-45 minutes before your workout.

This one is pretty obvious, most people know what caffeine is and that it is most commonly found in coffee. Caffeine stimulates the central nervous system and thus increase mental focus, alertness and energy. Caffeine also has the ability to delay the onset of muscle fatigue and as well as the perception of it.

In fact, when you take a mainstream pre-workout the majority of the effects you feel are from the caffeine content. It is the most effective ingredient you can find whilst being inexpensive.

In terms of dose you will need to experiment since everyone is different and a dose that is effective for you might not be for somebody else depending on your tolerance. As a general rule to get you starts use between 100-200mg and then adjust it from there. Having said this, I wouldn’t recommend going over 300mg.

The second ingredient I would recommend is L-Tyrosine. L-Tyrosine is an amino acid and it is an essential building block for catecholamines which are involved  in performance, altertness and focus i.e. dopamine, adrenaline and noreadenaline.

If taken on its own there won’t be much effect as it only has a synergistic effect when used in conjunction with caffeine. This is because L-Tyrosine increase production of catecholamines however you need caffeine to increase their release. I would recommend a dose of between 1 to 3g of L-Tyrosine. Against the results will vary from individual to individual however you should start with a low dose and gradually increase for  the desired effect.

A pre-workout is definitely something you should cycle as so you don’t build up a tolerance to it. Take a full 2 weeks off every 6 to 8 weeks of continual use.

These simple ingredients will save you a truckload of money and cost you a fraction of what a mainstream preworkout would cost you.

A very common concern amongst male bodybuilders is, do I need to see a doctor? I think my testosterone is too low. People are overly concerned with their testosterone levels and through this has sprung a market for testosterone boosters.

Testosterone does play a huge role in increasing muscle size and strength and put simply the more testosterone you have the faster you will be able to change your physique and put on quality muscle whilst burning fat. This is why many competitive bodybuilders inject testosterone to speed up their progress.

As of today there are no testosterone boosters in the market place which will have the effect you are looking for. The largest increase we have seen is via d-aspartic acid that has shown increases in testosterone of about 30% however this is not even close to being large enough to have the desired effect.

So if they have no benefit to building muscle are there any benefits to natural testosterone boosters? As a way to enhance libido for men in the older age range or as a mild mood or energy enhancer then perhaps.

When we talking about boosting your testosterone we shouldn’t really be thinking about increasing it to an above normal level but rather just making sure that we are reaching our natural potential. Such as if our daily habits are causing us to have lower levels of testosterone then normal then we can go around correcting these habits. If, on the other hand, you have already reached your natural capacity then there is nothing else you can do to go beyond your natural baseline.

In order to ensure your testosterone levels are optimised you should make sure have enough dietary fat. Dietary fat is essential in the production of hormones and is why competitive body builders when cutting into the low body fat percentages often suffer from a decrease in libido.

Thirdly, is exercise. If you are reading this then you probably don’t have this problem but by engaging in regular physical exercise you will peak your testosterone levels over the long haul.

Certain vitamin and mineral deficiencies such as zinc, vitamin D and b6 and magnesium can cause your testosterone levels to fall. Ensure that you are eating a healthy balanced diet filled with micronutrients and you should be fine. If you are already getting enough of these vitamins and minerals then supplementing further with them will not lead to an increase in testosterone.

In conclusion you don’t need to waste your money on testosterone boosters, they are likely not have any effect and if they are, the effect is not large enough to see any difference in your results.

An EC stack contains both Ephedrine and Caffeine and is used to help burn fat.

Ephedrine is a herb that has been widely used in China for the past 5000 years to treat asthma and hayfever.

Caffeine is obviously found in coffee tea and cocoa beans amongst others. Caffeine, in coffee, is one of the most popular stimulants in the World used by millions of people each day.

Ephedrine can help you burn fat as it increases the levels of adrenaline in the body thus it mimics your body’s natural fight or flight response. This includes increasing your rate of perspiration, your heart rate and blood flow to your heart, muscles and brain. This is all designed to increase your energy levels in order to increase your chance of survival. Ephedrine may also have the ability to suppress your appetite and during time periods of caloric deficits seems to aid in retaining muscle tissue.

Caffeine has many similar effect to that of ephedrine, it just does so by an alternative pathway, without going into detail caffeine will help with fat loss due to increased thermogenesis and energy levels.

EC stacks have been proven in the vast majority of studies to help with the goal of fat loss. Mixtures of both caffeine and ephedrine are also safe and won’t damage your health.

Since both caffeine and ephedrine uses different pathways to achieve similar effects there is a synergy between them and so when used together  will yield increased results compared to when they are used in isolation.

You may have to reduce the quantity you take if you are or find yourself sensitive to the EC stack and then adjust accordingly depending on your tolerances.

You should also take into account that since these are stimulants you shouldn’t take them past late afternoon as it may hinder your ability to fall asleep.

Ephedrine has often be labelled as a dangerous substance particularly by the media however this isn’t back up by any research. All the latest research has shown it to be safe with no real side effects whilst still be an effective tool to lose weight.

However, if you have any medical conditions such as heart disease, pregnant, high blood pressure then you should stay clear of an EC stack as it could cause problems. For healthy individuals you should stay within the recommended dosing and there shouldn’t be a problem.

Overall an EC stack is a great fat loss tool that can help you burn some extra calories. It shouldn’t be used as a crutch to burn fat but as an additional extra to burn those last few problem areas.